How make it work

To get the emulator started you simply must type it's name in the MSDOS prompt, or double click the file in Windows. There are actually two versions of the same program. The first one (bacteria.com) supports sound via Sound Blaster, the other one is for users without soundcard or not fully soundblaster compatible cards (bacterib.com), this versions uses the PC internal speaker for audio output.

Keyboard emulation is quite simple, since all keys Speccy had (it had 40) are easily matched with a PC keyboard (it has 102) . Have a look to the Speccy keyboard to understand it better. 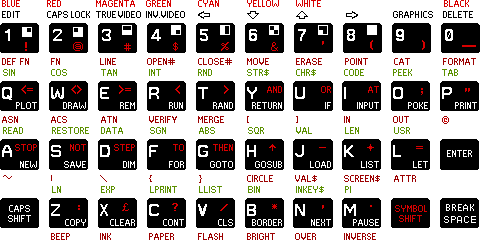 Just in case Caps Shift matches with the PC's LEFT SHIFT key, I have chosen LEFT CONTROL for Symbol Shift.

Above keys are needed for emulation but the emulator itself has other keys you might find useful;


How to load games

You must have a game image in TAP or SNA format. In every version of Bacteria I include a different game to test the emulator in case you have no images. So if you don't feel like finding games, you still can have new games in every download of Bacteria.

In case you have a file of those formats, it is very easy to run the emulator. You only have to type the name of the executable followed by the name of the game you have. For instance, if you have Fernando Martin Basket Master in the FMARTIN.SNA file, and you are going to use the soundblaster version, you must type the following to run the game (you must use bacterib in case you don't have a soundblaster).

And you will be playing the game, it is that simple.

For tap games you must use the same procedure, but the load isn't automatic, you have to type LOAD "" and press Enter. This is done pressing the J key (for LOAD) and Control+P twice (for the quotes).

Bacteria can't support other formats because they are many, and it would make the executable grow much, and I don't want such a thing, since I want this emulator to be the smallest of the Spectrum and probably emulator scene.


How to type the Basic Programs

As you all know, the spectrum 48k has a built in BASIC interpreter in it's OS, thus the possibily of typing programs made in this language, unfortunately, to save extra memory, Speccy used the extended ASCII characters to encode the keywords. This way a sentece like PRINT occupies one byte of memory instead of five. This has an annoying inconvenience, since to type a sentence you have to press the corresponding key in the proper mode.

The main trouble is that such correspondence was printed in each original Spectrum key, unlike the keyboard we use for emulation. Thus, you have four ways of typing programs in the emulator. If you haven't typed nothing in a Spectrum, and don't know much about it's modes, you might find useful the following scheme: